The numbers of conditions that registrants selected are represented as percentages of those reporting 1 condition to the maximum of 6 conditions, as shown in Figure 1 below. 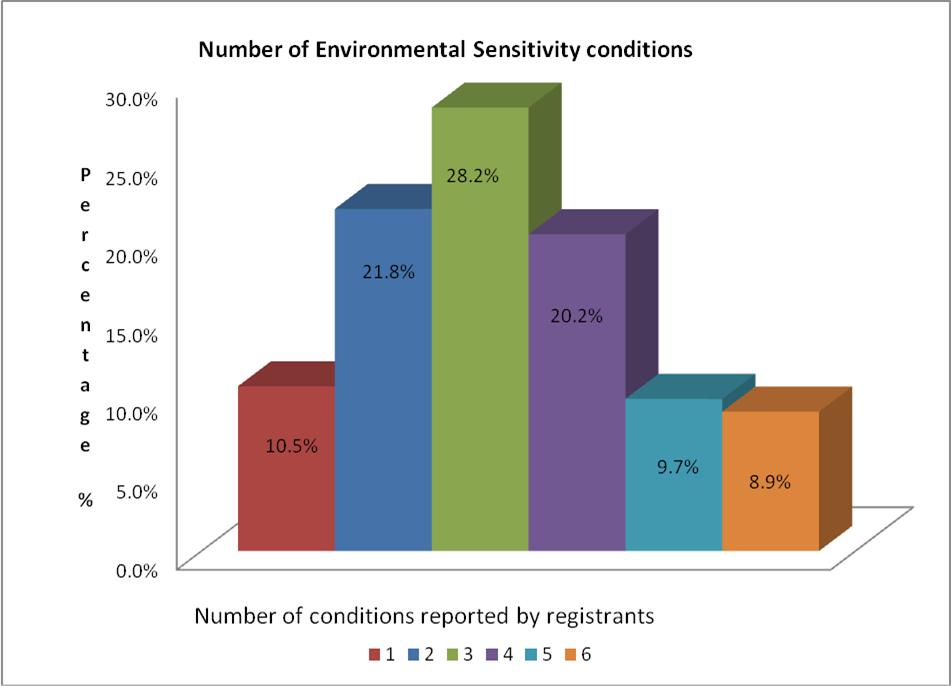 Of those selecting one condition 7 reported EHS/ES, 2 reported Fragrance Sensitivity and one each for Lyme Disease, CFS, MCS and Food Sensitivity. 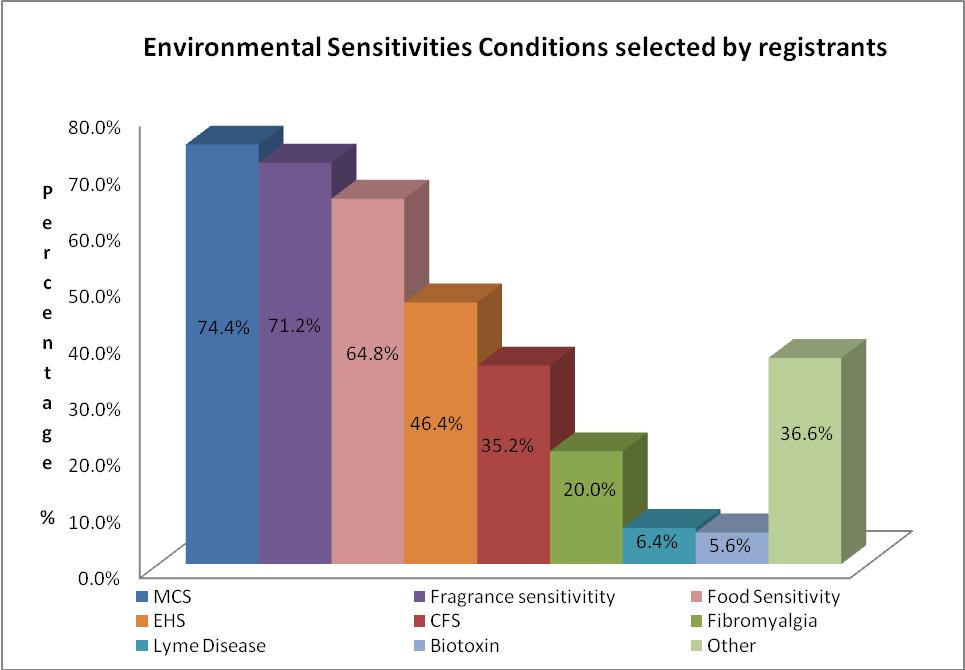 The most common co-conditions are shown in the three following graphs, Figures 3 – 5. 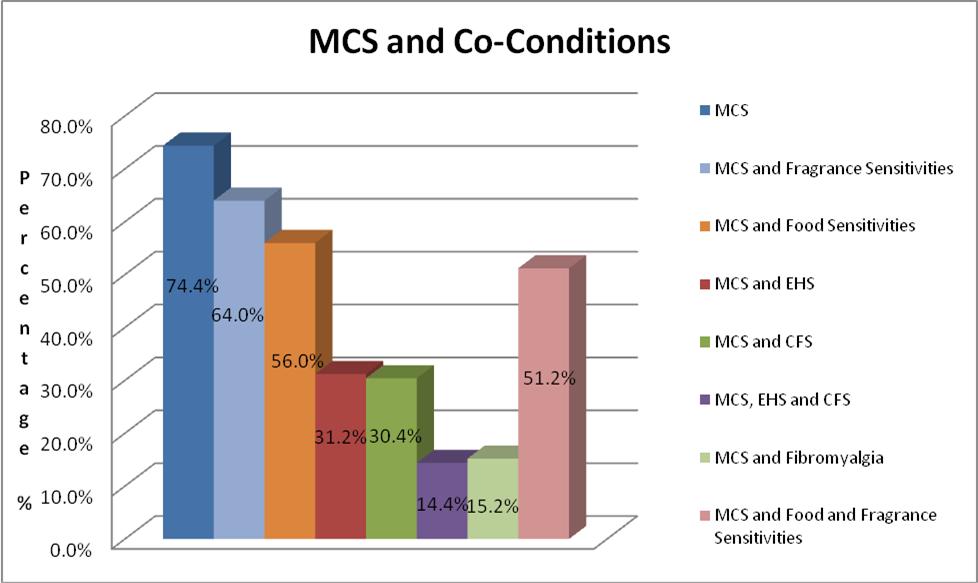 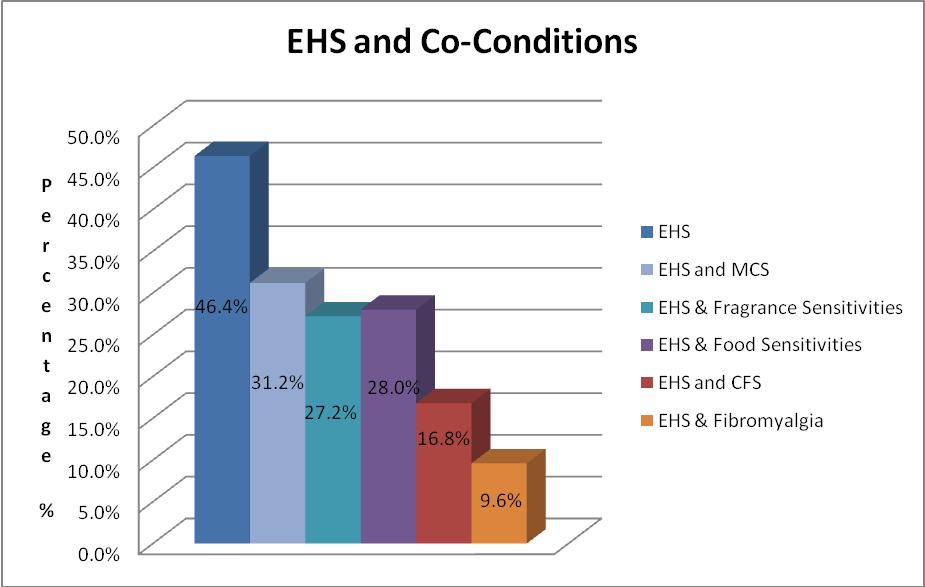 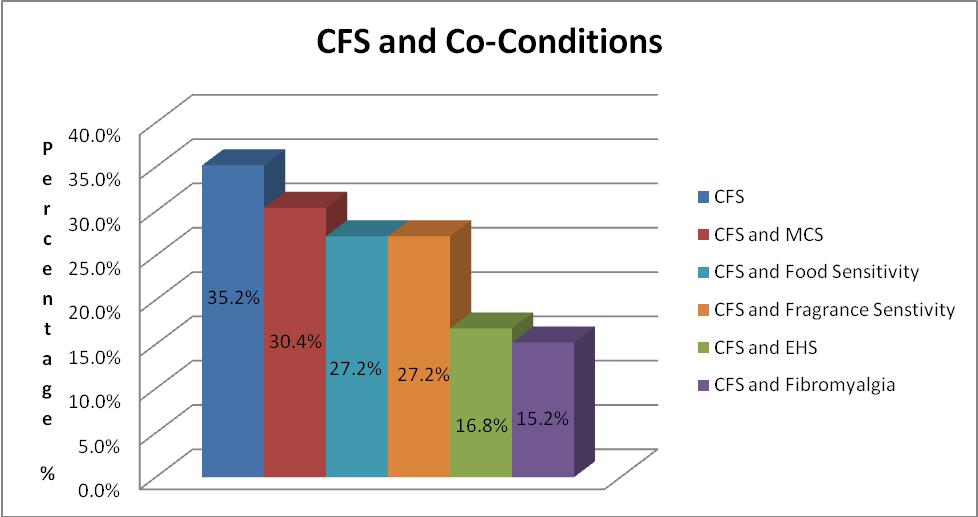 Hardships and difficulties encountered by those with Environmental Sensitivities. 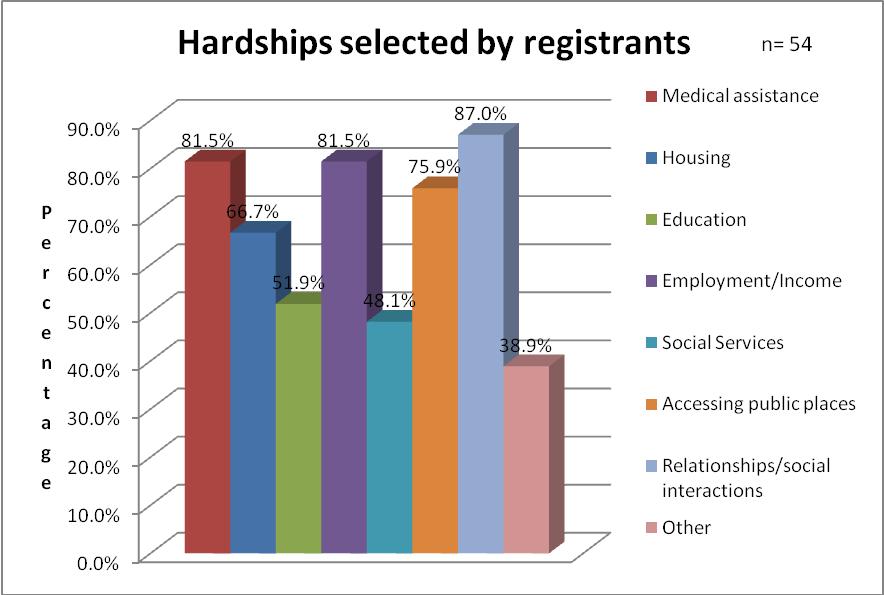 The other areas that individuals indicated they have difficulties with were generally an extension of accessing public places due to exposures to fragrance, other chemicals or electromagnetic radiation.

The number of hardships that individuals encounter in their daily lives is shown in the Figure 7  below.

83% of people selected 4 or more areas of hardship. 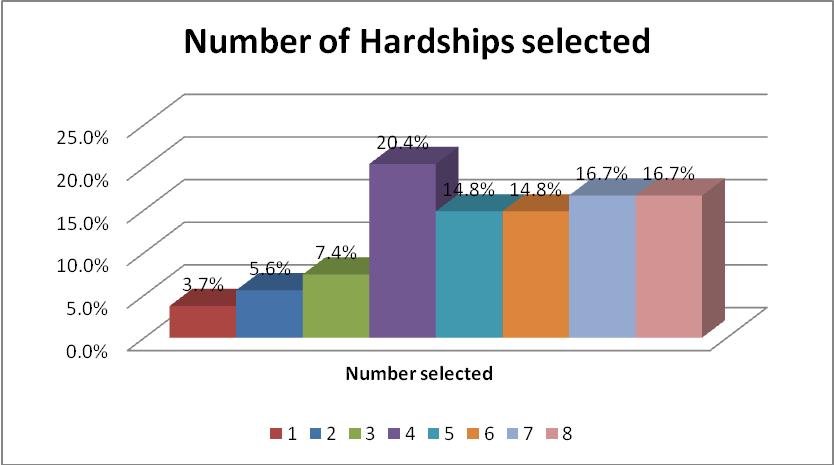 The conditions where most hardships were selected are shown in Table 1 and figure 8 below.

The conditions associated with most hardships are MCS, Fragrance Sensitivity and EHS/ES. 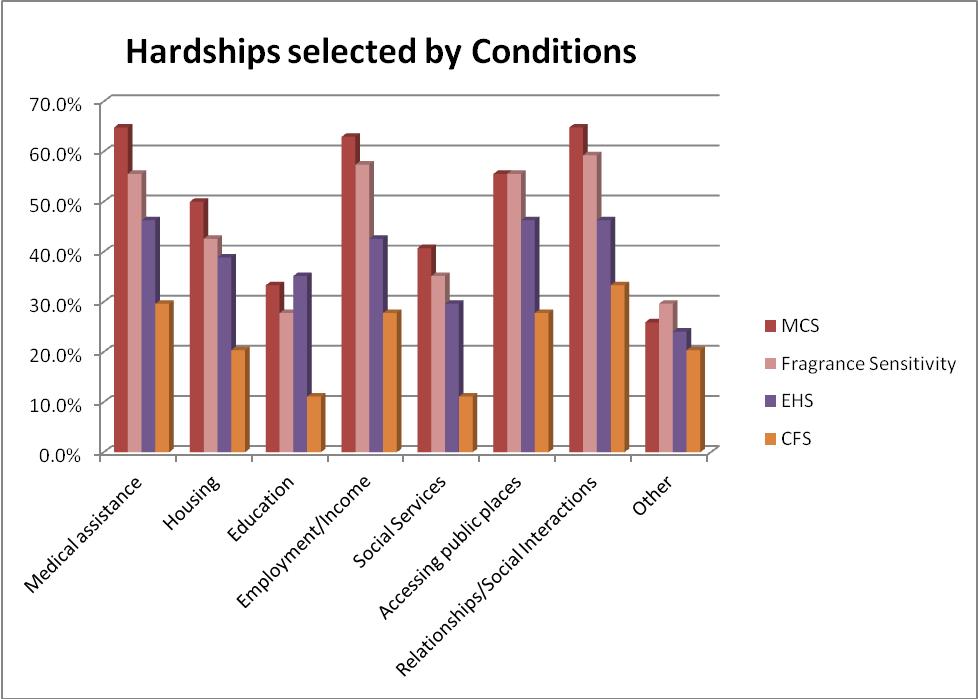 Lack of Knowledge of Environmental Sensitivities amongst Medical Professionals

Some have found alternative therapies to help and many have by necessity researched their condition to find a diagnosis and means to improve their lives. “There are no pills for these ills. And that is a blessing in disguise because I’ve found that holistic living (diet, exercise, lifestyle upgrades) make it possible for me to have hope.”

There were difficulties finding affordable safe housing away from sources of EMR and free from chemical triggers in building materials, paint, new carpets, pest treatments.

Other location issues were

Where unemployment has resulted from developing their condition they have no money and are unable to move and either buy their own home or rent.

Others feel they are stuck where they are despite their issue/problems with proximity of phone towers, hot spots or chemical usage. They do not have the money or resources to move and do not know where to move to.

There were comments that the proliferation of chemicals and EMR in the workplace has meant that they cannot work, or made redundant after disclosing sensitivities. Most felt they were now unemployable.

Environmental Sensitivity Conditions are not understood in the community and consequently people are not being believed and suffering ridicule and bullying as a result.

For one who is trying to manage in the workplace  “I suffer daily in my workplace…. they do not take it seriously and I feel victimised, bullied by certain people occasionally and very isolated.  I have even been told by my Leader Maybe this isn’t the job for you”

Education facilities and libraries are increasing using new wireless technology. For those with EHS these facilities using wi-fi technology are unavailable for them.

For those with MCS the prevalence of perfumes and other chemicals were found to be a barrier.

Two secondary school aged children who are very sensitive to EMR may need to be home-schooled in order to avoid it.

As there is no recognition of Environmental Sensitivities Disability Support pensions are not accessible.

A large number of people have little to no social interactions and have difficulty forming or maintaining relationships due to the complex nature of their conditions and a lack of understanding by the general population.

Some are particularly isolated from public, family and friends, and are no longer able to work

Even when family and friends do acknowledged the problem and not wear a perfume, there are other layers of fragrance.  The use of soaps, shampoos, conditions, deodorants and washing machine products all leave traces of fragrance that makes it difficult for others to comply. They often cannot smell the background levels of fragrance that these products leave.

The use of wi-fi and mobile phone usage is ubiquitous in the community, family, friends and visitors often carry a mobile phone and have them switched on.

Isolation was a common theme.

Chemical and electromagnetic exposures have radically changed the quality of life for those with chemical, fragrance and/or EMR sensitivities. Isolation and social exclusion is brought about by the barriers (chemical, electromagnetic, attitudinal, economics) to accessing medical care, education, work, transport, housing, welfare and recreation for those who must avoid chemicals and/or EMRs. Disability is exacerbated by the lack of medical assistance and resources.

Communities fail to consider chemicals and EMR as a barrier to participation in society.  For what is not recognised or well understood there is a tendency to ignore, minimise the importance of, ridicule or deny outright.  This leads to discrimination in work, medical care, and community access. This results in problems with finances, relationships and sense of identity for people attempting to avoid exposure.

The medical model of disability means that GPs are often required to have an input on access to social welfare payments. This medical mandate, combined with the lack of knowledge of toxic-induced illness among providers, is a serious barrier to people with ES and contributes to the disabling effects of chemical and electromagnetic barriers. 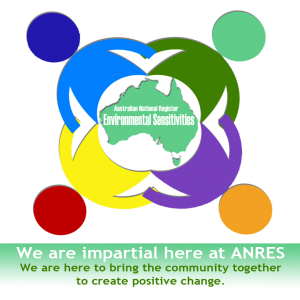